Wow what a hectic weekend.  This weekend was the ultimate treat to myself that I booked in the summer, essentially a working weekend, but doing something I really enjoy.  For 4 years I developed my cupcakes in Switzerland, I learnt everything from scratch from tinkering with the recipes, to getting the best results with the sugarpaste that I had to source from London.  I had no or very little opportunity to attend classes, so I taught myself.  Towards the end of my time living in Switzerland, I saw ‘Hello Naomi’s’ advert on Flickr, an online contact of mine from virtually the beginning of my time with the Flickr community starting in about 2006.  There was core of bakers who started cupcakes all at the same time, and many of those members now have flourishing businesses.  Coming back to the UK, I start anew, however it gives me the chance to learn new and exciting techniques as there are so many sugarcraft experts here.  Seeing that Naomi was coming all the way from Australia to share her work with others in a class 8/9 October at the Vanilla Workshop, I seized the chance and booked a place on her Extended Tier Wedding Cake course.  Large cakes are something I really want to develop, but have been afraid to get into, mainly as I went down the cupcake line.  In my experience, it seems difficult to be good at both large and small.  I like working on small scale, and find the blank canvas of a large cake a little daunting.  However, I have always admired Naomi’s work for being so elegant, classic, but deceivingly simple in the design.  I now know that naked cakes are the most difficult, there is literally nowhere to hide, the final finish has to be flawless.

I got up early, after spending since last Wednesday cooking cake until Friday.  We had to take 5 cakes with us to class, and only having one of each tin size, I had to dissect the recipe down in terms of volume to get the right split for the tins.  I also decided that as this was to be a large cake, I would take advantage of multiple batch cooking and cook 3 different flavours.  This decision was pretty risky, as I was not only working with an unfamiliar oven, but also with unfamiliar ingredients, new flour and butter.  I learnt in Switzerland which were the favoured products and which gave me unreliable results.  Here, I had the potential to really stuff up.  I did worry ahead of cooking all the cake, worried that I may create really bad end result.  The first mudcake I made was to be a white chocolate and raspberry cake.  I used Lindt Excellence white (which strangely is cheaper in France than in Switzerland) as I know it melts fairly uniformly. It smelt wonderful, if a little sweet smelling, from the amount of white chocolate and sugar that had gone into it.  Then after 15 minutes beyond the cooking time, 3 ¾ hours later, the cake was cooked. Next I tried a chocolate mud cake, buoyed by the fact that the white one was looking good.  The chocolate one had a drastically shorter cooking time, and by the time I was checking my smaller of the 2 cakes, it had already overcooked, and my larger one was perfectly done.  Eeek, had to recook another small chocolate one, the small cake was too dry and cracked ontop for my perfectionist liking.  The final caramel cake smelt amazing, using brown sugar and white chocolate, I really thought that this would taste as sweet as it smelt, but oddly not, just an amazing caramel flavour, and one of my favourites (surprisingly).  Now I had all three flavours of cake and they were packaged up ready to go. I cooked them in dribs and drabs between Wednesday and Friday.

Saturday arrived, and I boxed the cakes in my cupcake carrier boxes (thanks Ponsi) and they went on my old ladies Swiss shopping trolley wheels into London.  Got into Waterloo, connected with the Jubilee line, then changing at Canary Wharf to get the DLR to the Cutty Sark, a five minute walk down uneven pavements, and my cakes arrived in one piece at the Fair Cake Vanilla workshop in Greenwich.

We were introduced to the attentive team at Fair Cake workshop, and of course the unmistakable Naomi.  It is often strange to meet people who you seem to know so well online, you are missing that personal element often, you can see some of it reflected in their work, but you never get the full picture until you see someone face to face.  The first day was pretty full-on, there was a lot to accomplish by the end of the day, and many of us stayed on an extra hour to complete making the petals for our flower that was to go on our cake.  We torted our cakes into beautiful even layers, ganached and smoothed, and before too long, a whole day had whizzed by.  Naomi had demoed a cake upfront, and then we set to work attempting to create something similar!  It did show me that it does not matter quite how your cake had turned out, after the cakes were ganached, they all looked amazingly uniformly smooth.  I did find that I was the only one who had done different flavoured cakes though, everyone else had made plain chocolate ones.  It was a revelation working with ganache, and not something that I had attempted before, probably because of my rather rocky relationship with it in the past.  Swiss chocolate is great to work with though, and even the most inexpensive own brand chocolate from COOP is really well tempered, and about 1/3 of the price of what I was using at the weekend! 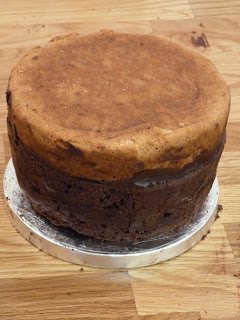 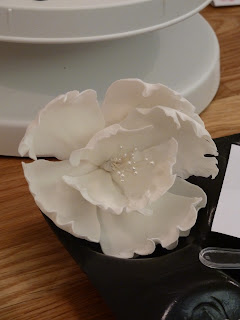 Sunday was another early start, but my mind had been buzzing with all the new ideas that the previous day had brought with it. Slightly less to do on the second day, but mainly working with sugarpaste and covering the large extended tier.  We were shown one of the 2 methods explained by Naomi.  It is a tricky job, one where you really could do with growing an extra pair of hands!  It is a lot of sugarpaste to handle all in one go!  The last part of the session was spent putting together the wired petals (first time for me) and the stamens on the open peony flower, and then working on the piping.  Naomi allowed us to use some of her classic pipework designs for practice, and I look forward to creating something (hopefully as inspiring) in the future, but I need way more repetition before its really clean.  I was pretty pleased with how my first try turned out.  Fighting gravity on the top parts of the petals was really hard! The design looks easy, but believe me it’s far from it, I had to remove my pipework several times before I had to settle on what it is now on my cake.  Not perfect, but not altogether bad. 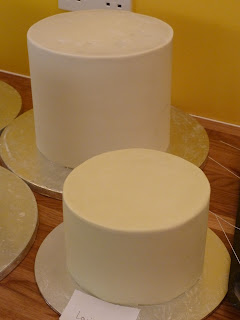 Naomi kindly helped me with the finishing touches, not quite enough time to do my board at the end, as I had a taxi all the way back to Wokingham, and could not delay my pickup.  But it was ribboned, adorned with my pretty flower, photographed and boxed by the Faircake team.  My cake made the journey all the way home with no damage, I actually broke a petal and dinted the sugarpaste when walking out the studio, and the extended box top blew off the top, and I used my chin to keep it from flying away!  Other than that, the cake travelled perfectly, did not move an inch in the boot, despite going over numerous speed bumps and going round roundabouts at good taxi speed!

Thanks to all the participants, organisers and to Naomi once more, I had a truly great weekend, and learnt heaps! 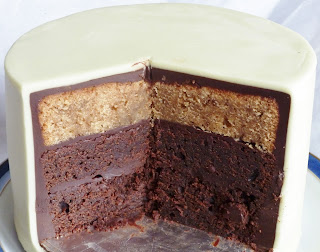 ....now we have alot of cake to eat :-)
Naomi, thanks for featuring me on your blog too! http://hello-naomi.blogspot.com/
Great class: highly recommended if Naomi visits the UK again!
Posted by Wokywoman at 13:37

Wokywoman
Secondary school teacher for 6 Years in the UK teaching Geography to University entry. Moved to Switzerland due to husbands job change. Now have 2 daughters and after 8 years in Switzerland running my own cupcake business, now getting used to being back in the UK.